Vehicle theft is a very common thing in India. On a daily basis several vehicles from different parts of the country go missing. Normally thieves target popular models and in past we have read several news reports were cops have caught thieves in the act. Here we have a video that shows a gang of thieves trying to steal a motorcycle and getting busted by police men on night patrol.

The video has been uploaded by TimesRajasthan on their youtube channel. The video shows the CCTV footage of the whole incident. The CCTV is installed inside a housing society. A bike with three people on it enters the society and comes near the place where the light is quite less. One of them gets down and gets behind the SUV that was parked on the side of the road. The other two thieves left him and he went to steal the vehicle.

For once, it looked like, the thieves were planning to steal the SUV. Suddenly, couple of police officers enter the same road. It seems like they are on their routine duty. As soon as the thief spots the officers, he hides behind the SUV. Police stops in front of the SUV and looks around if everything is right or not. After that they move ahead. Once they had gone, thief comes out and pulls a KTM RC model bike from the parking. By this time, the officers come back and catch the thief red handed. 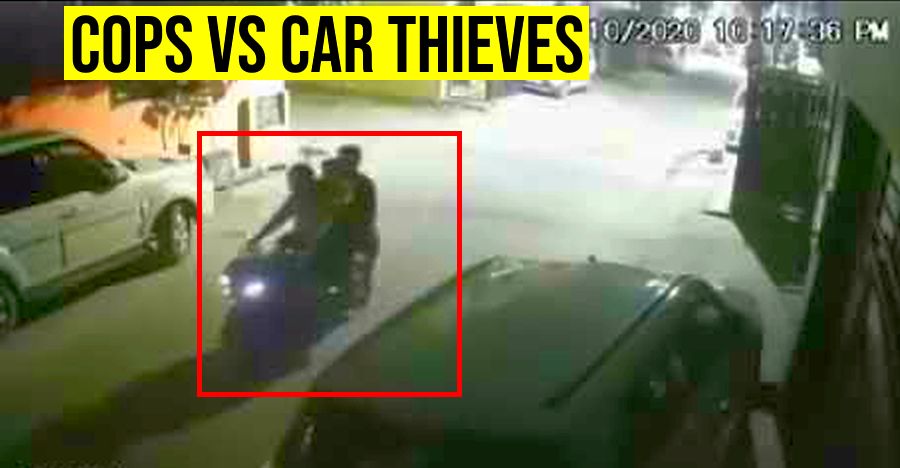 The thief tries to escape with the bike and the officers were trying to get a good hold of him. He hits the KTM on to the officers bike and to the SUV parked nearby. He then drags the police officers with the bike and finally falls after losing control. One of the officer can be seen holding the leg tightly while the other tries to immobilize him. They contact a nearby PCR and the van comes to the spot within minutes. It is not known whether they had caught other members of the gang who had dropped him at the spot. The two cops definitely did a great job in catching this thief.

There are a few things that you can do to keep your motorcycle safe.