French car manufacturer Renault has been present in the country for a while. One of the most selling cars from the brand was Kwid hatchback and one of the recent launches from Renault is the Triber MPV with AMT gearbox options. Renault is now working on a new SUV based on the same platform as Triber and is likely to be known by the name Kiger. It has been spotted testing couple of times on our roads and here we have render images of this upcoming SUV showing what it could look like. The Kiger will take on sub-4 meter compact SUVs such as the Maruti Brezza, Hyundai Venue and Kia Sonet. The renders have been shared by Kleber Silva on Behance. He has created several such renders in the past. The Renault Kiger SUV is basically a sub-4 meter compact SUV that will compete with the likes of Maruti Brezza, Hyundai Venue, Kia Sonet, Mahindra XUV300 and Tata Nexon in the segment. It will be based on CMF-A platform which is the same that is use din Nissan’s upcoming Magnite SUV. The same platform is seen in Renault’s Triber and Kwid as well.

Looking at the render images, the front of the SUV looks a lot like Renault’s Captur SUV. It looks like the headlights are all LED and there is an LED DRL which is actually an extension of the headlamp itself. The front bumper looks quite muscular and there is a faux skid plate as well. Fog lamps are missing on this render image.

Moving to the side profile, there are black claddings around the wheel arches and the side body which adds to the rugged look of the SUV. The render also shows dual tone alloy wheels that look good on the SUV. Kiger render gets a dual tone colour scheme with silver coloured roof rails on the top. 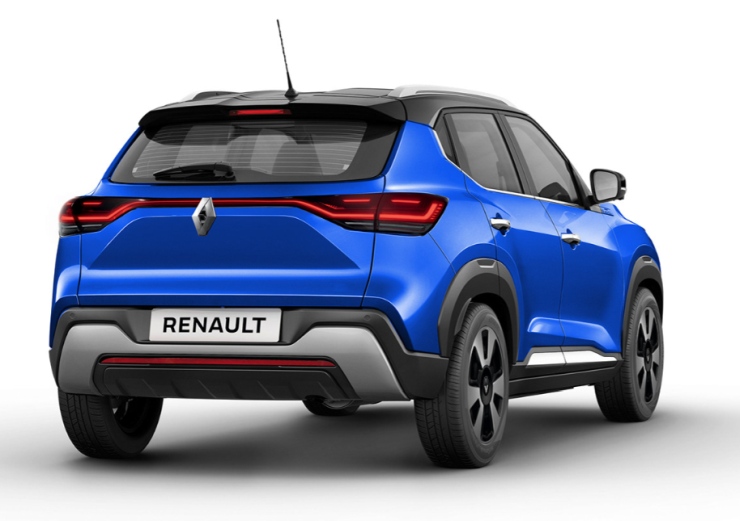 Moving to the rear, it has a spoiler on the roof which is similar to the one seen in recently unveiled Nissan Magnite. The tail lights are all LED and there is reflector bar connecting the tail lights. This is a common trend now seen in many SUVs that are being launched recently. In comparison to the front, the rear bumper is not that muscular but, has a refletor strip and a faux skid plate at the lower portion.

Just like the platform, Renault Kiger is expected to share its engine with Magnite too. it is expected to get a 1.0 litre turbo petrol and a naturally aspirated petrol engine with CVT or manual gearbox option. This just a render image and the original SUV showing how the SUV could look like. The final product is expected to be different from the image. Renault will be launching the Kiger SUV in the market next year.