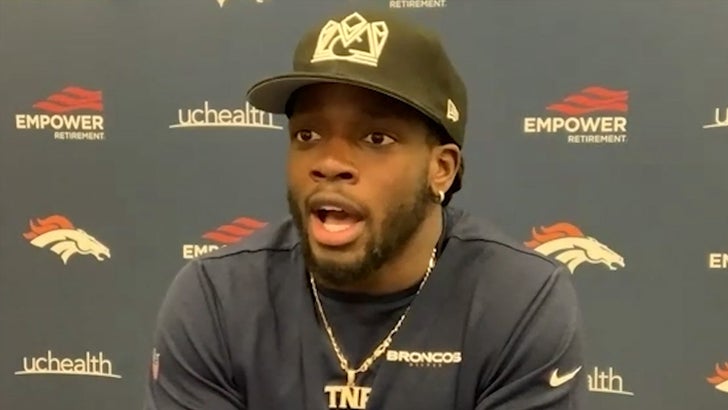 Melvin Gordon issued an apology to his Broncos teammates and the entire city of Denver for his DUI arrest earlier this month … saying straight-up, “I am sorry.”

The running back was accused of drinking and driving back on Oct. 13 … after cops say they pulled him over for doing 71 MPH in a 35.

In the police report, obtained by TMZ Sports, the arresting officer claimed Gordon had slurred speech, watery eyes and reeked of booze.

Gordon was eventually hit with 2 DUI charges and a speeding violation over it all … and, when he spoke with reporters Wednesday for the first time since the incident, he apologized vehemently for the arrest.

“Because of legal things, I haven’t been able to publicly go out and say what I needed to say just from me to you guys to put it out,” Gordon said, “I am sorry that I was even in the situation.”

“I don’t want people to feel like, ‘Oh, because Melvin didn’t say anything or he didn’t speak on it, he just don’t care. He’s not apologetic about the situation.’ That’s not the case at all.”

Gordon continued, “To the people of Denver and everyone I just don’t want anyone to feel like I just don’t care and, you know, ‘Oh, he got his money, he don’t care.’ I do and not happy that I was in the situation.”

“But, it’s something I just wanted to let you guys know that you could put out to the people for me.”

Gordon — who signed a 2-year, $16 million contract with the Broncos in March — is now facing league discipline and could be hit with a suspension this season over the arrest.

As for the criminal case … Melvin — who’s rushed for 349 yards and 4 TDs this season — is due for a hearing in court next month.

266 thoughts on “NFL Star Melvin Gordon Apologizes For DUI Arrest, ‘I Am Sorry’”