(Photos by Mike & Jeff Burghardt and Timothy Heather – Words courtesy of NHRA Communications) – Billy and Steve Torrence powered to the top two spots in Top Fuel on Saturday during qualifying at the 20th annual Dodge NHRA Finals presented by Pennzoil at The Strip at Las Vegas Motor Speedway, bringing S. Torrence a step closer to his third straight world championship.

Torrence went 3.728-seconds at 325.30 mph in his 11,000-horsepower Capco Contractors dragster, with his son, Steve, a step behind at 3.731 at 330.39. It is B. Torrence’s third career No. 1 qualifier and first this season. Should S. Torrence win his first-round matchup on Sunday against Kebin Kinsley, he will claim a Top Fuel world title for the third consecutive year. He clinched his first world title at Las Vegas two years ago and now has an opportunity to do it again in 2020 to keep his incredible run going. 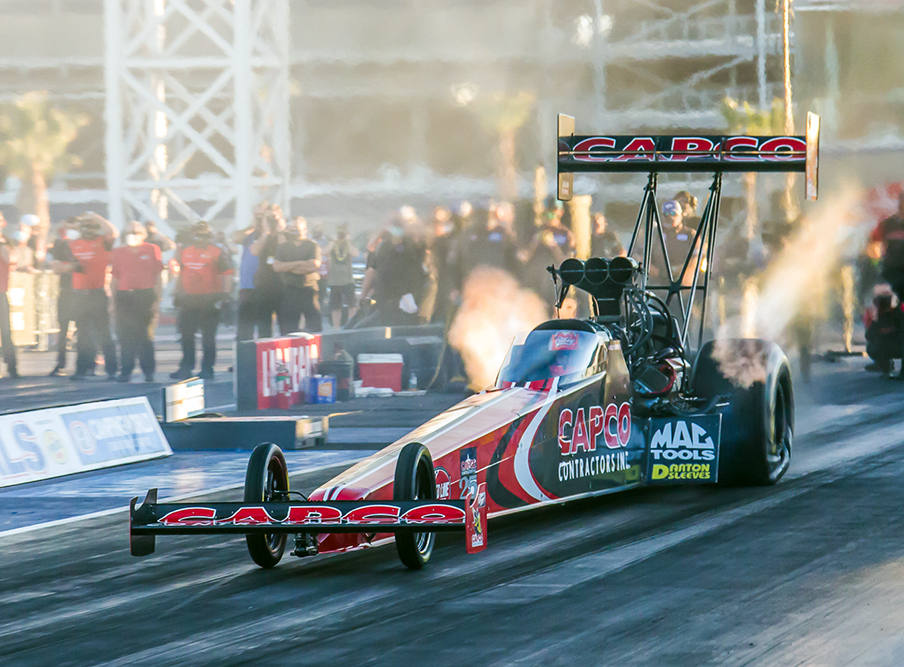 “I saw my old man keep on rolling down through there, so I knew it was on a good run, but we’ll just go out and do what we need to do tomorrow,” S. Torrence said. “We need to go rounds. We don’t need to worry about what the points are and who we have. We just need to go rounds tomorrow.”

Doug Kalitta qualified third with a run of 3.746 at 327.74. To claim his first world championship, he’ll need to win the race and have S. Torrence lose in the opening round. 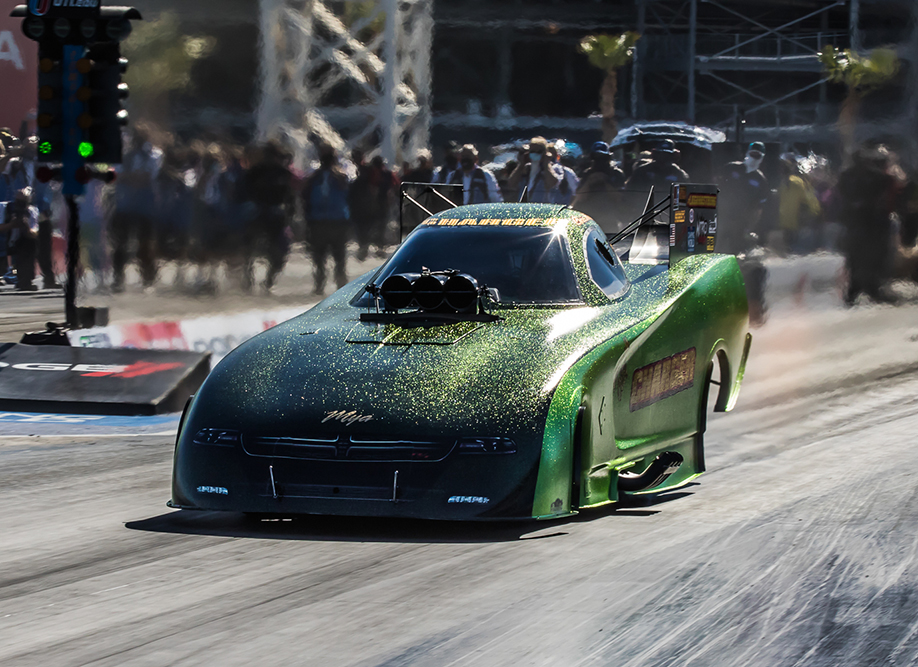 In Funny Car, Ron Capps picked up his first No. 1 qualifier of 2020 and 25th in his career, powering to the top spot with a run of 3.902 at 327.98 in his 11,000-horsepower NAPA Auto Parts Dodge Charger SRT Hellcat. He will take on rookie Chris Morel (above) in the first round of eliminations as Don Schumacher Racing seeks its 14th straight victory in the class and a sweep of the 2020 season.

His strong run bumped teammate Matt Hagan to the second spot, as the points leader looks to claim his third career world title. Hagan ran 3.911 at 327.82 and he’ll meet Cruz Pedregon to start raceday. He leads DSR teammates Tommy Johnson Jr. and Jack Beckman by 45 and 52 points, respectively, heading into eliminations. Johnson qualified fourth with a 3.915 at 319.14 and Beckman starts raceday from the 10th position. With the race being a points-and-a-half scenario, a round win is worth 30 points, meaning Johnson or Beckman would have to finish two rounds ahead of Hagan to win a title. 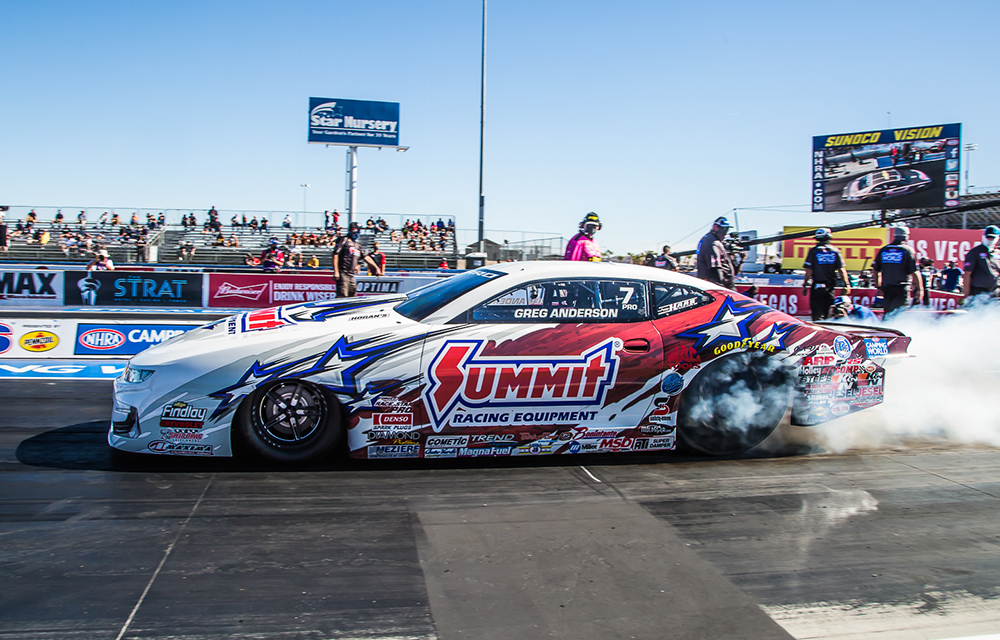 The Summit Racing Equipment/KB Racing Pro Stock team of Greg Anderson and Jason Line impressed during qualifying on Saturday, with Anderson taking the top spot and Line, who has championship aspirations in the final race of his Pro Stock career, following in second. Anderson went 6.601 at 206.73 in his Chevrolet Camaro to claim his second No. 1 qualifier this season and 106th in his standout career. He’s also an eight-time Vegas winner and opens eliminations against Aaron Strong.

Line, meanwhile, will head into race day second after going 6.635 at 206.39. That brings him to within 47 points of leader and defending world champ Erica Enders heading into eliminations. Enders struggled on Saturday and qualified 12th, and will take on Elite Motorsports teammate Alex Laughlin in the first round as she seeks back-to-back world titles. The third championship contender, Jeg Coughlin Jr., qualified ninth and is 55 points behind Enders heading into Sunday, which is also his final race in his storied Pro Stock career.

Following his win last weekend, Eddie Krawiec continues to stay hot in Pro Stock Motorcycle, vaulting to the No. 1 spot with a track record run of 6.818 at 198.12 on his Harley-Davidson FXDR. It is Krawiec’s second No. 1 qualifier — his first came at the opening race of the season — and the 48th in his career. The victory last weekend in Houston kept him in championship contention and he’ll open eliminations against Cory Reed, trailing leader Matt Smith by 80 points. 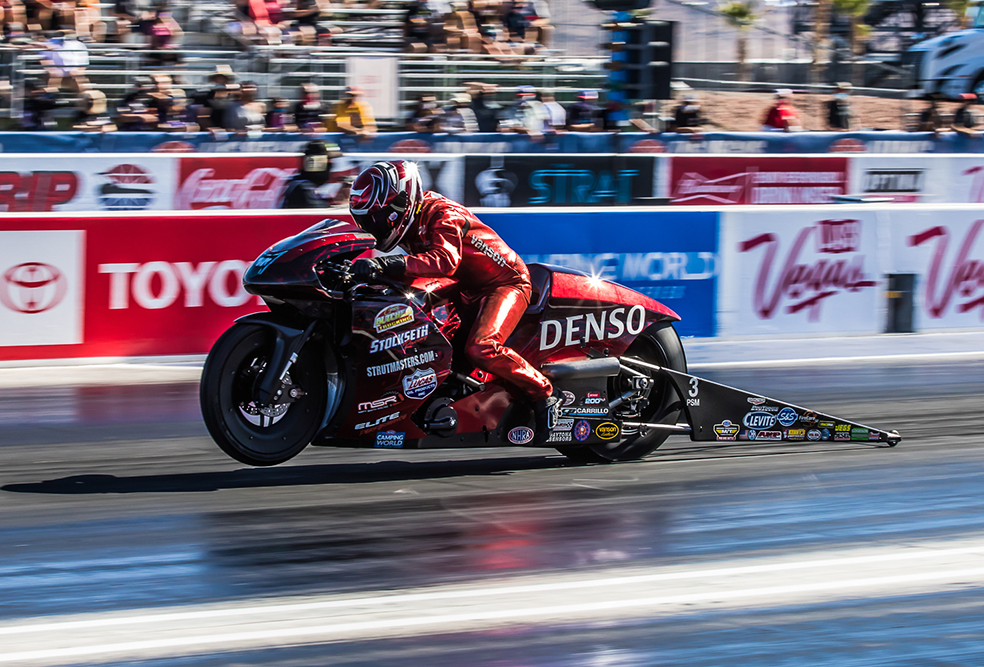 Smith (above) qualified second with a 6.821 at 198.38 and he’ll take on Krawiec’s teammate, three-time champion Angelle Sampey, in the first round. Joey Gladstone qualified third with a 6.893 at 195.56. Scotty Pollacheck, who is 86 points behind teammate Smith, remains in contention as well after taking the fourth spot with a run of 6.900 at 196.04. 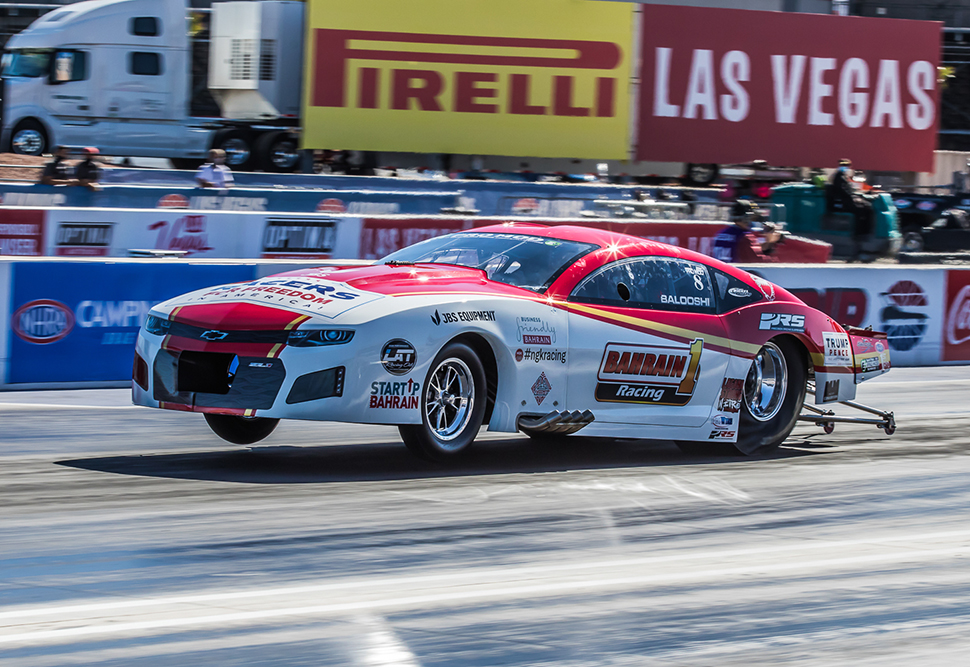 In the E3 Spark Plugs NHRA Pro Mod Drag Racing Series presented by J&A Service, Khalid alBalooshi qualified No. 1 for the third time in 2020, going 5.755 at 248.34 in his ProCharger-powered Bahrain 1 Racing Camaro. Points leader Brandon Snider took the second spot at the race, which is presented by Strutmasters.com, with a run of 5.766 at 248.71. He’ll open eliminations against Brandon Pesz and started the weekend with a 26-point lead over defending world champion Stevie “Fast” Jackson, who qualified fifth. Should both Snider and Jackson win their first-round matchups, they would meet in the second round with the winner getting a bye to the final round.

Check out our Saturday Pro, Sportsman and Pro Mod Gallery from the 20th annual Dodge NHRA Finals presented by Pennzoil at The Strip at Las Vegas Motor Speedway!