One of the most awaited launches of this year was the all-new Mahindra Thar. The new-gen Mahindra Thar was officially launched in the market earlier this year and the deliveries for the same will start from next month. It has been one of the most talked about topic on the internet in the last couple of weeks and several videos showing the off-road capabilities have also surface online. Here we have one such video that shows Mahindra Thar being driven across a very narrow off-road track.

The video has been uploaded by Rajeev R on his youtube channel. The video shows soft top convertible version of Mahindra Thar being driven through a very narrow off-road track. It seems like, this was done as part of some off-road event and the narrow path was one of the stages in it. The video starts by showing the Mahindra Thar being driven down a steep section to enter the narrow path.

The new Mahindra Thar has 27 degree break-over angle and it smoothly went down without hitting the bottom. Once it was inside the narrow track, the driver needed a guide because he could not see the track properly. There were several narrow turn inside the track which Mahindra Thar managed to conquer without too much issues because of its short wheelbase. 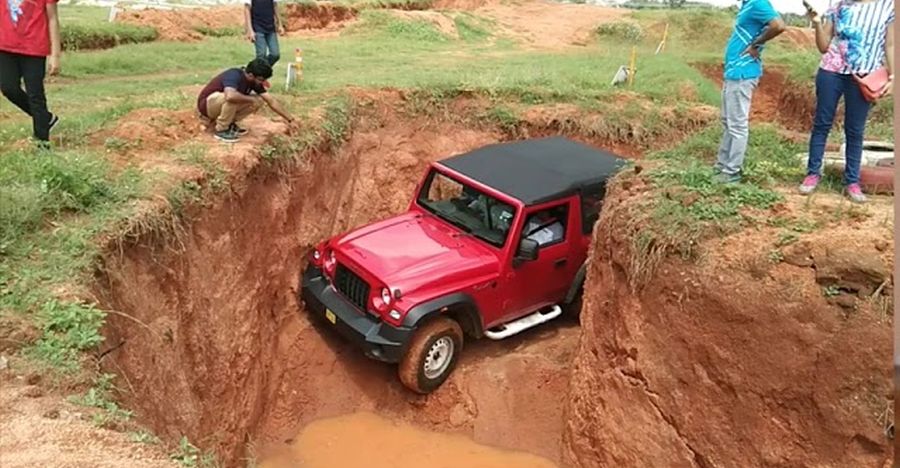 There were couple of narrow turns where the driver had to back up a bit to make more room. small pits filled with water were also a part of the narrow track and in order to tackle all these obstacles, the driver was driving the Thar in 4 Low as the Thar cannot pickup speed in such conditions and the torque multiplication help it get out of tricky situation. The path or track was so narrow that it was barely fitting the Thar in it.

Mahindra Thar is available in AX and LX trims. It is available with a factory fitted hard top for the first time. It now comes with both petrol and diesel engine options and both engine come with manual and automatic gearbox options. Mahindra Thar has improved a lot in comparison to the older version. It now offers touchscreen infotainment screen, speakers, front facing seats and is a lot more comfortable to drive on and off-the road.