For years now, Ford and Ram have been locked in a battle of supremacy over who can haul the most ass. Okay, bad choice of words…in a few aspects. Historically, Mopar and the Blue Oval folks have fought over speed, most infamously in the 1970s Aero Wars, where both companies were willing to go well beyond the normal to bury each other under the finish line of the local superspeedway. Now, however, the goal is to sell as many profit-lining big trucks as possible, and the way you do that is to sell the most kitted-out, lux’ed up big truck that you can offer. Even though most people will never find the further end of the towing rating, Americans have spoken and the higher the towing rating, the better off you must be. This is where things have been heated…Ford claims that their F-450 swings the biggest bat around and has staked that claim for years…even though technically it qualifies as a Class 4 truck instead of a Class 3, where a traditional one-ton would be.

Now General Motors is wading into the fray after remaining fairly quiet on the subject. The Silverado 3500 HD, specifically the regular cab, rear-drive dually with the 6.6L Duramax, the 10-speed automatic and the max tow package, is rated for 36,000 pounds, trumping the F-350 by a quarter-ton and the Ram 3600 by 900 pounds. Carscoops.com reported this, and almost immediately got a response from Ford, who disputed the claim. The F-450 is rated for 37,000 pounds, but again, there is contention between whether or not the F-450 even qualifies as a Class 3. In the past, there have been claims that Ford has put the F-450 on a crash diet and that a purpose-optioned stripper was used to earn a Class 3 rating. GM seems to agree and has officially said as much, insisting that consumers shop by tonnage rating and not specifically by GVWR in regards to pickup trucks. And there might have been a dig in the response they issued to Carscoops. From Megan Soule, Chevrolet’s manager of full-size truck and SUV communications, a quote: “The bottom line is GM’s pickups have gained considerable share this year and the Chevrolet Silverado HD has played a big role in that thanks to it’s capability. Needless to say, it’s caught our competitor’s attention.”

Note one thing: the flirting with the line requiring drivers to gain a CDL license with the potential combinations. Just putting that out there… 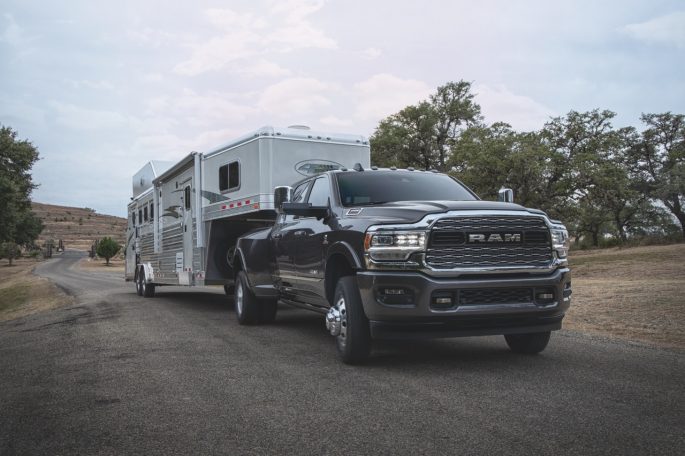 The post The Towing Wars Continue: Now GM Is Getting Involved! appeared first on BangShift.com.