Kia Seltos SUV was launched in the Indian market last year and it quickly became popular among customers due to various factors like the design, features and the price. It competes directly with SUVs like Hyundai Creta, Tata Harrier, MG Hector in the segment. In India, the front wheel drive version of Seltos is only available. International markets get an all wheel drive version of the same. Here we have a video that shows a front wheel drive Kia Seltos SUV crossing a river without any problems.

The video has been uploaded by shrikant hirulkar on his youtube channel. It is a small video that shows Kia Seltos crossing the river couple of time without facing any problem. The first time, it crosses the water does not look that deep and the SUV with its ground clearance easily manages to get across. On the second round, water was till the front grille of the SUV. Even then, Kia Seltos managed to cross it without any problems. 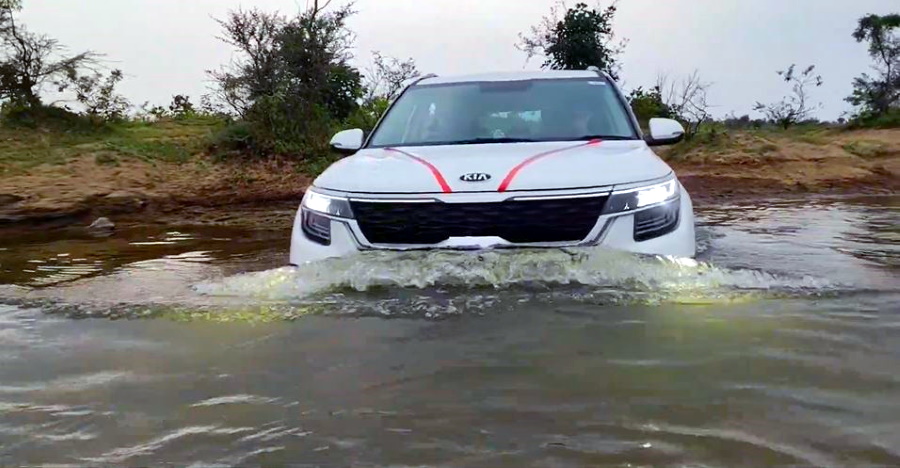 This Kia Seltos did not face any problem in the video but, that does not mean that you should do it. Car as we all know has number of electrical parts in it. Just like in the case of any other electrical appliances, water is a villian here as well. There is a huge possibility that while doing such experiments water might get into the circuits. It can damage the ECU in your vehicle which is quite expensive to repair or replace.

As seen in the video, the water was almost touching the front grille. If water reaches the air intake of the car in huge quantity, the engine will stop working. The engine gets hydrolocked and the whole engine will have to be opened and cleaned thoroughly to bring the car back to life. Many of the modern day cars come with sensors that detect if the water gets in the engine. This sensor then automatically stops the engine and the same process of opening and cleaning will have to be carried out. This method also involves a huge amount of money and time.

The Seltos has not been designed for such extreme adventures. It is more of an urban SUV which offers a long list of features. In case you cannot avoid doing such activities, at least invest on a snorkel. you must have seen this on almost all the vehicle that go for hardcore off-roading. A snorkel saves the vehicle from getting hydro-locked in such situations.

Also, a vehicle that’s front wheel driven can easily get stuck in hidden slush that water crossings often have. In such situations, a four wheel drive transfer case with low range will be necessary to navigate through the obstacle without the vehicle getting stuck.

35 thoughts on “Seltos goes water wading but should you attempt such things in compact SUVs? [Video]”