The advancement in automobile technology over the years and further development has ensured that the price of the components goes down drastically. A few years ago, only expensive vehicles offered the “white” lights in the form of LED but the arrival of the cheaper version of the Light Emitting Diode or LED has changed that scenario completely. While there are many who upgraded the headlamps to High-Intensity Discharge (HID) lamps in the early 2000s, now its often an original fitment – even in scooters and motorcycles! The new-car market is currently ruled by the LEDs while the more expensive cars have moved to the laser lights. Examples of affordable cars that offer LED headlamps include the Maruti Swift, Honda Jazz and Toyota Glanza.

The arrival of the LED lamps has completely changed the automobile lighting solutions in the modern era. Let alone the four-wheelers, the cost-effective LEDs are now available as stock equipment with almost all the two-wheelers in India. And as most of us know, only a few people drive or ride with the headlamps switched to the low-beam. In most vehicles at night, drivers keep high beam remains permanently engaged, causing temporary blindness and eye fatigue to the drivers who come from the opposite direction. But can you avoid it? Here are a few tips that you can incorporate in your driving next time to reduce the glare as much as possible.

How you can save yourself from headlamp glare

A clean, dust-free windshield will ensure that the light does not refracts and creates glare. Always keep a clean cloth to wiper the windshield properly.

Avoid scratches on the windshield

Always remove the layer of dust with a microfibre cloth or a spray of water before wiping the glass clean. It is also a good idea to not clean in swirl motion as it has a tendency to leave scratches on the windshield.

Change cracked windshields as soon as possible since the crack can refract light to create blinding glare.

This can drastically reduce glare from other headlamps. Also, yellow driving lenses can be bought to reduce glare. It should be noted that if you are using anti-glare lenses, the coating wears off after a couple of years and it may not be as effective then as when bought new.

Check if your eyes are alright

Reports also suggest that the bright lamps can affect the people in the older age group the most. If you always have to squint when a vehicle passes you in the opposite lane, you should visit an ophthalmologist to get your eyes checked properly and wear corrective lenses, if required.

Headlamp glares: Why does it happen? 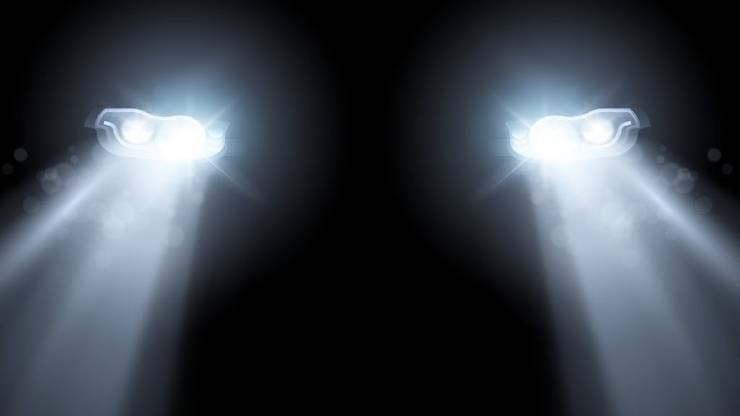 In recent times, you must have noticed that the glare from the oncoming vehicles has increased compared to a few years ago. Apart from the rise in the number of cars and two-wheelers on the roads, there is a number of other factors that can cause glare from oncoming vehicles. The glare can be caused by the high position of headlamps in the cars. This is why mounting lights on the roof is banned in India.

Also, most people drive their vehicles with misaligned headlamps, which can throw the light beam directly on your face causing a blinding effect. Also, the new-age headlamps with blue lights cause more glare than the good old halogen lamps.