Mahindra will soon be launching the all-new, 2020 Thar in the market. Reviews and off-road videos of the all-new Mahindra Thar are already available on the internet. The Thar has a cult following and most of the enthusiasts around the country are eagerly waiting for 2 October to know the price. There are several reports that suggests that Mahindra will be pricing it quite aggressively. According to some reports, prices for Mahindra Thar will be starting at Rs 9.75 lakh and will go up to Rs 12.25 lakh, ex-showroom. As we are all waiting for Mahindra to announce the prices officially, here we have a crazy video of Mahindra Thar that has recently surfaced on the internet.

The video shows a Mahindra Thar taking a big jump in an open area. The video is shot in slo-motion and the the driver can be seen driving the all-new Thar towards a ramp. The ramp looks quite steep in the video and as soon as the Thar hits the ramp, The front independent suspension absorbs all the shock. It feels like the suspension had completely bottomed out as there is a sound a sound in the background which felt like the tyres had hit the wheel arches on the inside.

The driver doesn’t stop there and continues to drive the Thar forward the Thar manages to stay in shape after the impact and soon makes a big jump. The car is completely in the air and stays there for few seconds in the slow motion video. It seems like this particular stunt was done in order to take photographs. As soon as the Thar makes the jump, photographer starts clicking the images. On the way down, the Thar almost tipped over because it had hit the ramp in an angle that made side of the car hit the ground before front. 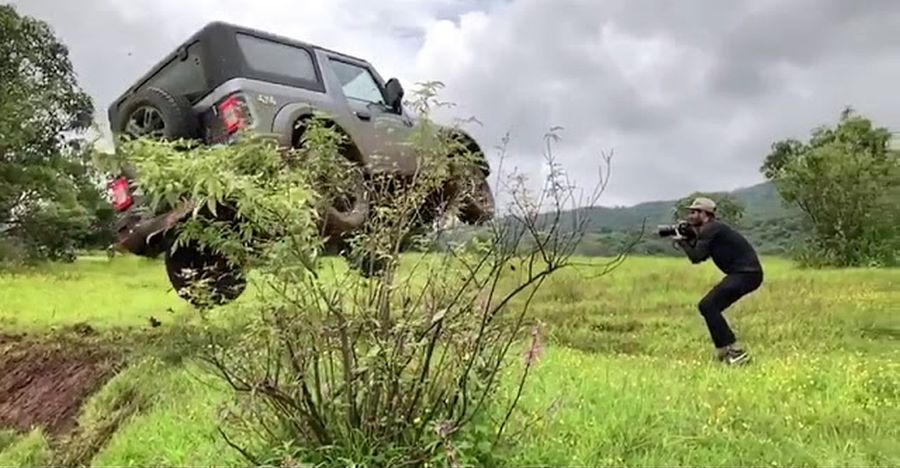 Meanwhile, here’s what the person who was involved in the jumping the 2020 Thar for the video shoot had to say about the BIG jump,

Attempting to jump the new Thar on the photographers request . Though it broke our heart to jump her like this, but amazingly the stock configuration Thar took it without anything breaking! Strong Machine!

The 2020 Thar is a great off-roader and this video shows how much effort Mahindra has put in making it a proper off-roader. It will be available with both soft top and hard top versions. In comparison to the older generation, new Thar is quite advanced in terms of electronic safety aids and creature comforts. It comes with a petrol and diesel engine options. Both petrol and diesel engine will be available with a manual and automatic gearbox options.