Royal Enfield as motorcycle brand has a huge fan following in India and around the world. It is famous among buyers for its retro looks and the comfortable riding position. Currently flagship model from the brand is Interceptor 650 and Continental GT 650. Just like other Royal Enfield motorcycles, these 650 twins also became popular and are doing great in terms of monthly numbers. Interceptor 650 is currently the most affordable twin-cylinder motorcycle one can buy in the country. In this article, we have a video that shows a lady police officer buying an Interceptor 650. She also explains why she chose the motorcycle.

The video has been uploaded by Biker Prakash Choudhary on his youtube channel. The video shows a lady police officer taking the delivery of her brand new Interceptor 650. Video comes from Telangana and the officer can be seen riding her brand new motorcycle on the streets along with two RE Himalayan riders.

The vlogger then congratulates the officer for her new bike and asks why has she chosen bikes. As a reply to that question, the officer says that she wanted to prove that ladies are equally capable of riding a motorcycle and are no less than men. This is not her first two wheeler she can be heard saying on video that earlier she used to ride scooters and back in 2015 she bought her first 350-cc Royal Enfield and then bought the 500-cc Royal Enfield in 2017. She even used her motorcycle to patrol the streets at night. For this she had received appreciations from her seniors in the past. 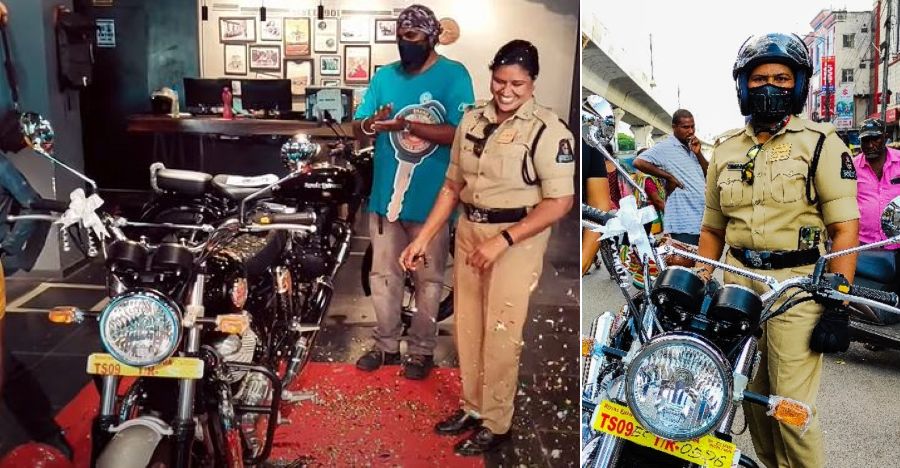 Coming to the Interceptor 650, she once went out for a breakfast ride with hundreds of riders and that is when she rode the motorcycle for the first time. She was skeptical about the weight of the bike but, fellow riders encouraged her to ride it. She loved the bike and finally ended up buying one for herself.

Royal Enfield Interceptor 650 as mentioned above, is currently the most affordable twin cylinder motorcycle in the country. It is a 650-cc, twin cylinder, oil cooled, fuel injected motorcycle that generates 47 Ps and 52 Nm of peak torque. It is mated to a 6-speed gearbox and the engine is now tuned to meet BS6 emission norms. Royal Enfield is also working on a cruiser motorcycle based on the same platform and it was spotted testing on our roads recently.