Toyota Innova is a very popular MPV in the country. Ever since its launch in India, it has been a huge success and people have been using it for both personal and commercial purposes. People loved Toyota Innova mainly because of its reliable engine, comfort and the low cost of maintenance. The first-generation Innova got discontinued a couple of years ago, and was replaced with Innova Crysta, However, there are still some well kept examples across different parts of the country. Here we have a video of a Type 2 Innova that has been transformed to look like a Type 4 version.

The video has been uploaded by AutoRounders on their youtube channel. The video shows how the car looked like like when it came to the garage and what the final product looks like. The video shows, an black Toyota Innova which is in pretty condition from the outside. black paint on the car had started to fade away and there were several scratches and minor dents on the body. The chrome had lost its shine as well. The tail light on this Innova were broken and the owner had driven all the way from Chhattisgarh to Mumbai for the modification.

Also read: Superstar Rajnikanth drives around in a Lamborghini Urus

After the modification the whole look of the car got changed. The front grille was replaced with a type 4 grille and the main attraction on this MPV is the paint scheme itself. It gets an ultrasonic blue shade which is normally found in Lexus. The stock headlights have been replaces and new aftermarket units with projector type lamps, and dual function LED DRLs are installed. The paint job on this car looks absolutely gorgeous. 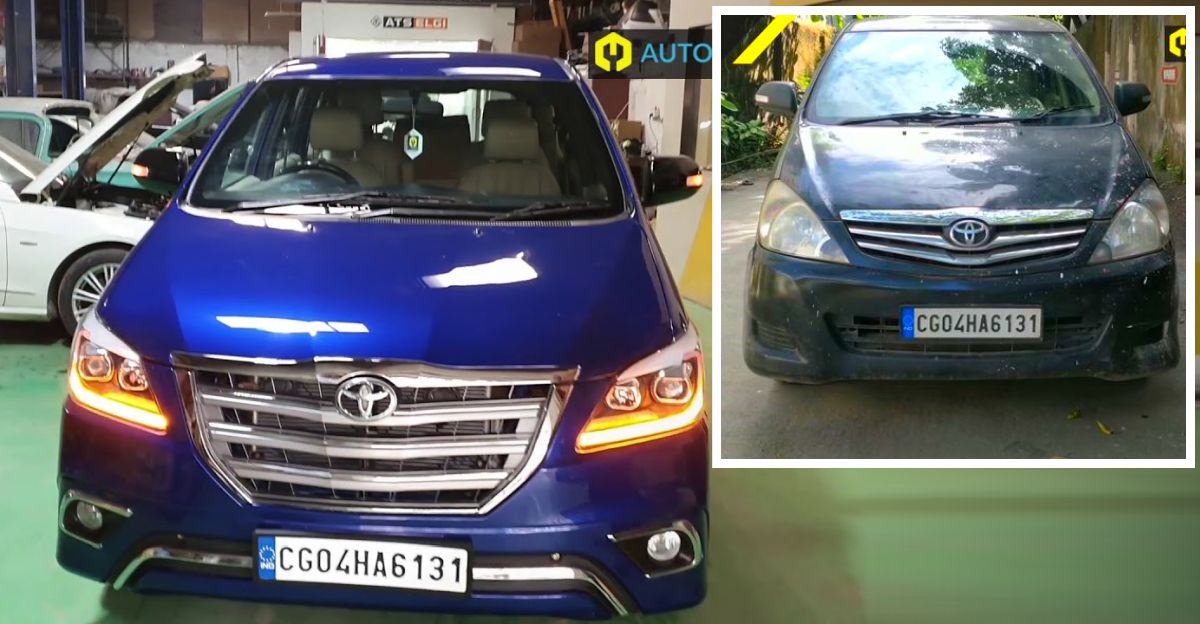 The tail lamps has also been replaced with aftermarket all LED units which gives it a premium look. The MPV is also installed with a new set of Momo alloy wheels. Interiors on this Toyota Innova has also been modified. The layout remains the same and the modifiers have only played with the colour themes. The interior gets a grey and silver theme and the roof uses black material.

It gets a simple 2 DIN audio system and the door pads and the seats all get a beige colour. Owner has also opted for ambient lighting which gives cabin a premium look at night. The overall look of the car looks great and the transformation job has been neatly done too. If anyone is interested in doing similar modifications, they can directly get in touch with Auto Rounder on 7666930930.

Also read: Toyota Innova 2.8 vs Hyundai Verna 1.6 in a drag race on video