Jeep is a well known brand among those who love big and bulky SUVs. Jeep Wrangler has been a choice of many who love off-roading. Jeep introduced their first model Compass SUV in our market officially in 2017 and later on introduced Wrangler and Cherokee too. Apart from Compass, all the other models sold in India are brought in as CBU and for that reason, it has a pretty high price tag. We have seen several modifications on Mahindra Thar and Boleros in the past that are heavily inspired by Jeep Wrangler SUV. Here we have one such Mahindra Bolero that has been modified to look like an Jeep Wrangler Renegade.

The video has been uploaded by GREEN ARMY Motorsports and the modifications have been done by them too. First impression about the car is that it does not look like a Mahindra Bolero from any angle. The front of the car gets signature Jeep grille with round headlamps on either ends. The bumper has been replaced too and a Wrangler like unit is installed instead. There are couple of LED fog lamps on the bumper and skid plate (probably faux) can also be seen.

The side fenders and and flared wheel arches all give it a proper Jeep like look. It also gets a hood lock and Renegade sticker on the bonnet.  The whole car gets a white and black dual tone treatment which looks good on it. The side profile also reveals the chunky looking tyres and off-road rims.  The side step, ORVMs, door handles are also borrowed from a Jeep Wrangler. 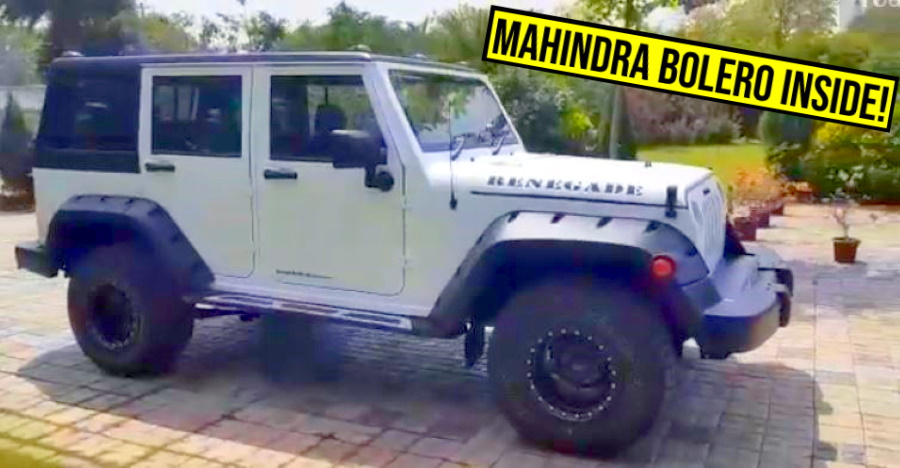 The rear gets tail mounted spare wheel, blacked out LED tail lights and an off-road bumper. The interior of the car has also been redone and gets an all black cabin. It gets round AC vents with brushed aluminium finsh, touchscreen infotainment screen, sunroof and comfortable all black seats. The car now seats 5 passengers and the third row has been left for carrying luggage. It is not known whether the engine on this Bolero has been swapped or is it using the same engine. It took Green Army Motorsports around 2 months to finish this product and the approximate cost of this modification is between Rs 8 lakh- Rs 10 lakh depending upon the features.

Also read: Toyota Innova 2.8 vs Hyundai Verna 1.6 in a drag race on video