Remember the person who made a Volkswagen Beetle at home? Well, he is back with another homemade project and this time, it is a bike. Rakesh Babu, who became popular after making his dream car – a Volkswagen Beetle has now made a Harley-Davidson 48 and it looks fantastic.

While there are many who do such transformation jobs, Rakesh Babu from Kerala did it in his own small garage and he fabricated all the required parts on his own. This is something that makes the bike really special. To start with, he got a used Yamaha Enticer. While many of us remember the Enticer very clearly, some of you may not. It is a cruiser bike launched by the Japanese company in the Indian market and it was available for around 3 years. Rakesh Babu bought the bike and it was completely non-functional at the time.

To start with the new project, Rakesh rebuild the engine completely and started the bike. He then started the transformation work. The Enticer was a low-slung cruiser, which is why the chassis had to be slightly altered. He then fabricated the fuel tank by looking at the pictures of the bike since he did not have a really Harley Davidson to get a reference. The other parts like the mudguards are also fabricated by him at his garage. 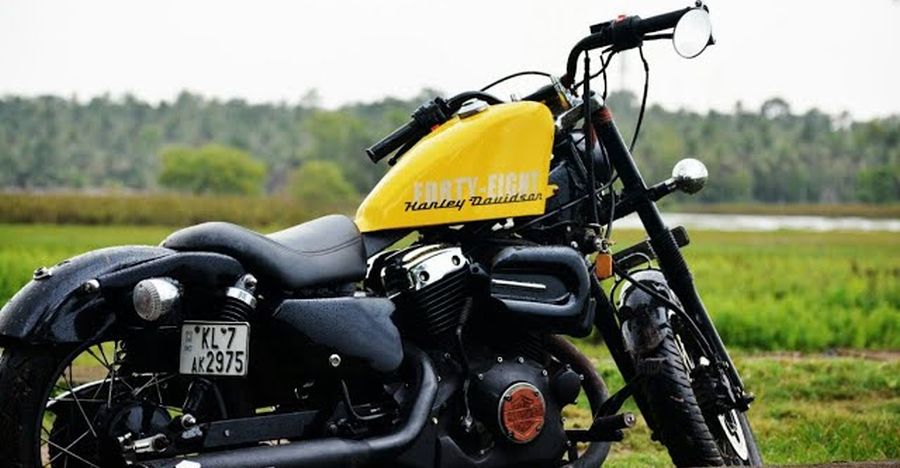 Interestingly, the Harley Davidson 48 offers a V-Twin engine while the Enticer gets a single-cylinder engine. To get the look of the real Harley Davidson 48, he fabricated a V-twin engine cover for the single-cylinder engine. It looks like a real engine. He also installed custom exhaust pipes. It is one-into-two set-up and both the exhaust pipes release fumes.

The headlamp is actually a foglamp from a car while the tail lamps are all customised at home. He has also upsized the tyres to make the bike look like a real Harley-Davidson. The video also shows the bike starting and the sound is quite different from the Enticer. It sounds deeper, which many will mistake for a Harley Davidson, especially those who have never heard a Harley Davidson engine before.

The exact cost and time taken for the modification job are not known but he has done an excellent job on the Enticer. He has also mentioned that the bike is not with him anymore as he has already found a customer who has bought the bike from him.

Before doing any such modifications, you should note that cops many stop you and seize your vehicle as these are not legal modifications. Any structural change to the vehicle is not legal in India as per law.