This year, different parts of the country reported some heavy rainfall and due to the excessive rainfall. Many city roads were completely drowned underwater and in many cases, cars also got stuck on the flooded roads. Driving on the flooded roads can be dangerous, especially if the road is unknown to you but then there are times when you just cannot avoid it. Here is a video that shows a Tata Nexon driving through water successfully even as a Volvo XC90 can be seen stopped on the road.

The video has been recorded through a dashboard camera. The Nexon driver takes out the car and then can be spotted assessing the situation by looking around. After he spots the Volvo XC90, he decides to go ahead on the road. The Nexon can be seen going smoothly through the flooded road. The driver crosses the XC90, which is parked in the middle of the road but we are not sure if the SUV has stopped because of some problem in the car.

The video shows an empty flooded stretch of road and people looking at the car in awe and shock. Towards the end, the water level seems to be rising even further. However, the person driving the Nexon does not stop at all and keeps on going forward. People even give him the way so that he can carry the momentum forward and cross the road. Towards the end, a Toyota Fortuner and a Mercedes-Benz GLC van be seen waiting nervously before they can enter the water. It seems like the driver of the Nexon knows more about the road and the area more than all other drivers in this video. 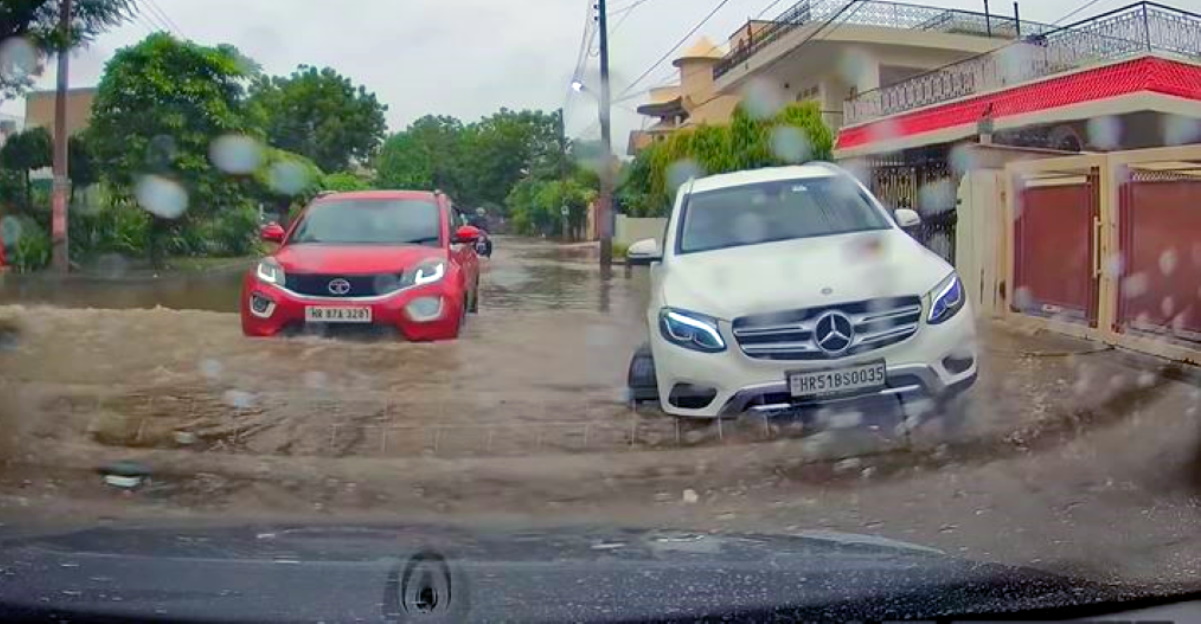 Tata Nexon boasts of 300 mm of water wading capability. It is quite a lot for a car from the sub-4, compact SUV segment. However, it really does not matter the car that you’re driving through the flooded roads, it can turn out to be very dangerous for your car and you. Driving on the flooded roads can cause the water to enter the air intake and hydro-lock the vehicle. It can even reach the combustion chamber and can cause major damage to the engine.

Also, if the ECU comes in contact with water, it can get short-circuited and blow. Repairing vehicles damaged by water can be expensive. Flooded roads can even damage the car’s electricals, which again are quite expensive to replace. Taking any vehicle out on the flooded road can be dangerous and it is best to avoid such roads, whenever possible. Never enter such flooded roads if you do not know anything about it.