Off-roading is extremely fun and you do learn a lot about the vehicle and how it behaves on a type of surface. Doing off-roading is a passion for many and there are numerous enthusiasts who own heavily modified vehicles to conquer the off-road tracks. However, off-roading can be dangerous if not done properly. A small mistake can make your car topple and if you misjudge the depth of a water puddle, you can get into a lot of trouble. One such danger in the off-roading is river crossing. While it may look extremely fun, it requires a highly competent driver along with an equally capable vehicle. Here are two examples that show river crossings are highly dangerous.

The first video shows a modified Maruti Suzuki Gypsy crossing a fast-flowing river. There is a track through the river but due to the monsoon rainfall, the flow of the river seems to have increased and even the currents are stronger. The Gypsy can be seen entering the river and driving half through it without a problem. However, it gets stuck in the middle and the driver had to negotiate the challenge without getting out of the vehicle and without anyone’s help. He reversed the vehicle and tried to break free of the spot and eventually he reached the opposite bank.

Also read: Modified Maruti Gypsy with 400 BHP is a BEAST

The second video is from the Spiti Valley and the vehicle is driven by talented Sunny Sidhu who has won many rally championship and is an ace driver. He is scouting for a safe route for the other vehicles to cross the river. He enters the river with the Mahindra Thar but could not judge the strength of currents. It should be noted that the water currents are stronger in the depth of the river than the surface.

Sunny took the car to the middle of the river and gets into a deep crevice, which made the Thar float around. The Thar even turns into the opposite direction due to the flow. Showing his presence of mind, Sunny puts the vehicle in reverse and waits to find tractions. As soon as the vehicle finds enough traction, he reverses and gets to a safe spot. 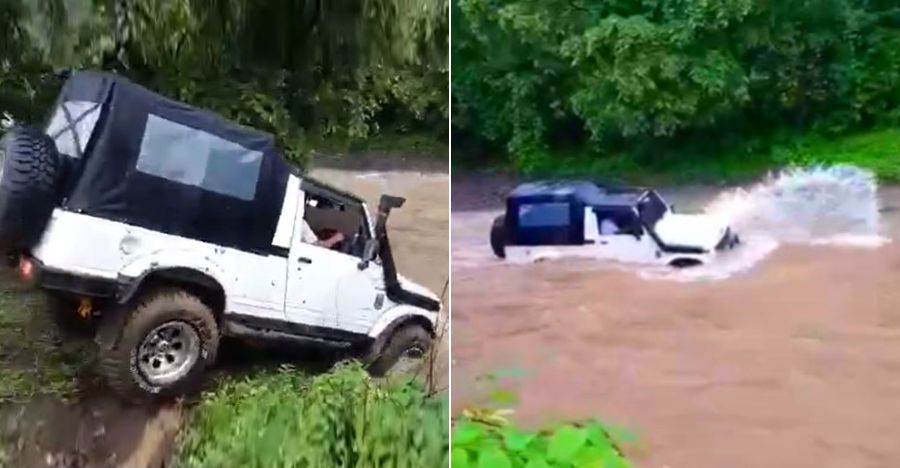 There is no doubt in the fact that the experience is great knowledge in such situations. While people with higher experience are more successful in negotiating an off-road course, crossing a river requires a lot of skills since you cannot see what is underneath. It is extremely dangerous and not everyone should do it. Cars often get washed away due to the strong currents and due to the high pressure of the water, it becomes almost impossible to open the doors to escape. This is why you should always be with an expert while doing such stunts and river crossings. If you have a 4X4 vehicle know its limits and capabilities before putting it through extreme situations.

4 thoughts on “River crossings are dangerous even in 4x4s: Here’s proof [Video]”