Toyota has recently launched the TRD version of the Fortuner in the Indian market. Soon, the manufacturer will launch the updated Fortuner, which will come with a more powerful diesel engine. The car was recently spotted testing in India and here is a new video that shows the upcoming SUV testing without any camouflage.

The video by GaadiWaadi shows the upcoming Fortuner testing with emission measuring equipment in the rear. Toyota is yet to announce the launch of the upcoming Fortuner officially in India. However, it is likely to be launched by the end of this year or in early 2021, depending on the situation and demand in the market.

The updated Fortuner was launched in the Thailand market earlier this year. Toyota launched two versions of the Fortuner in the Thai market. One of them is the regular Fortuner, which can be seen in this same video and the other one is an aggressively designed Legender, which comes with different and much more intimidating design language. Since Toyota is yet to announce the launch of the new Fortuner or Legender officially in India, we cannot predict if the Legender will be launched in the Indian market in the coming months.

The new Fortuner facelift gets a few tweaks to keep it fresh in the market. The biggest change that you will see in the SUV is the front grille of the vehicle that has been updated. Even the headlamps have been tweaked to look different from the current version which is on sale in the Indian market. The elements inside the headlamps have been updated too and it now looks futuristic. Toyota has also revised the bumpers and fog lamp housings with horizontal LED turn signals. At the rear, change includes new restyled LED tail lamps, which looks very modern. Also, the car has changed like a new skid plate and a massive Fortuner moniker on the tailgate. 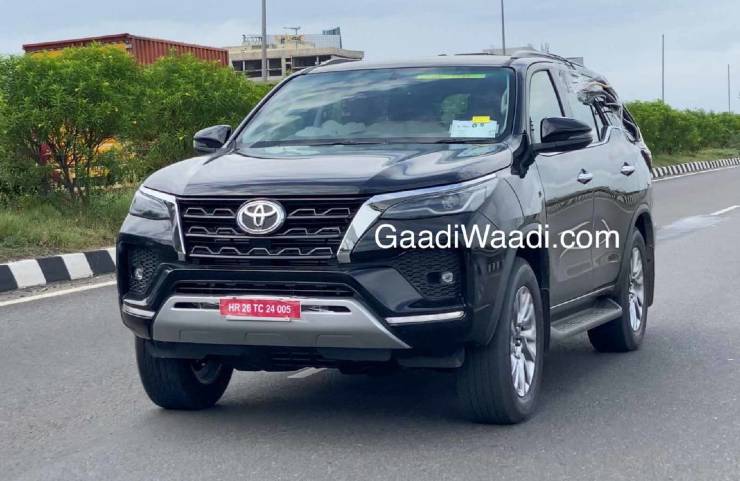 Even the cabin has received multiple changes including a larger infotainment screen with Apple CarPlay and Android Auto connectivity. The driver instrument panel has been updated with a 4.2-inch MID. Other features include 360-degree camera, automatic climate control system, wireless phone charger and more.

In the Thailand market, Toyota has updated the diesel engine. The 2.8-litre four-cylinder engine now produces a maximum power of 204 PS of maximum power and 500 Nm of peak torque. The output has increased from the version that is on sale in India. Toyota will continue to offer the 2.7-litre petrol engine variant with the updated version too.